Sardinia. Home of the famously glamorous Costa Smeralda. The island of VIPs, which, in addition to its sandy coastline, has a mountainous landscape of rare beauty. Perfect for camping and hiking.

After Sicily, Sardinia is Italy's second largest island. They are grouped together under the name of “The Big Islands” - Isole Maggiori. Sardinia has over a thousand kilometres of sandy coastline, with the most famous and fascinating beaches and bays in the whole of Italy, such as those of Alghero, Cagliari, Olbia and Porto Cervo.

Equally rich and fascinating is the mountainous and hilly hinterland, where, amidst little-known paths, one can also admire the nuraghi - ancient conical stone constructions, probably used by ancient civilisations for ritual purposes.

Sardinia, from north to south, is the perfect island for a camping holiday between luxury and nature, by the sea and in the mountains. The list of campsites in Sardinia is varied, so you can choose the type that appeals to you most.

Book your campsite now and plan your magical holiday in Sardinia with us... 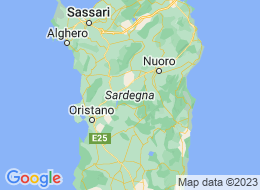 A selection of the best campsites in Sardinia

Thank you for subscribing - An email will be sent shortly