Sicily is unique in the world. An island blessed by sun, sea and a mild climate all year round, but also steeped in its very own traditions and culture that have been handed down for centuries. All of this – and in particular its beautiful beaches and landscapes – make it perfect for camping in any season.

Sicily is the largest island in the Mediterranean, a crossroads of peoples and cultures, traditions and inimitable flavours. Its gastronomy is famous worldwide, from lemons and blood oranges to extra virgin olive oil and delicious arancini and cannoli.

This island off southern Italy is filled with treasures that the whole world reads about and marvels at: from Taormina, the Valley of the Temples in Agrigento, the Baroque towns of Noto, Ragusa and Siracusa, the paths of Mount Etna, to the splendour of its beaches, including the enchanting bay of San Vito Lo Capo.

In Sicily, there are campsites to suit all tastes: by the sea, in the mountains, with swimming pools and with entertainment. You’ll find them in both eastern and western Sicily. Everything there, including the prices, will make you happy.

Book your campsite now and plan your magical holiday in Sicily with us... 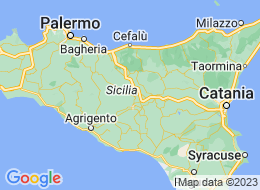 A selection of the best campsites in Sicily