The capital of Spain, Madrid is a mixture of culture and nightlife, tradition and modernity. It is beautiful, popular, avant-garde, artistic, elegant and a party town all at once... Planning a holiday in the Madrid area means being near a city where it is impossible to get bored.

It is well worth visiting the three art museums par excellence in the capital: the Prado National Museum, the Reina Sofía National Art Centre and the Thyssen-Bornemisza Museum. Stroll through centuries of art and then stop for a rest in a quaint café of yesteryear, watching the kaleidoscope of passers-by in the streets.

Wander through the centre, admire the majesty of the Royal Palace and the Plaza Mayor, continue along the characteristic Gran Vía, and seek relaxation amidst the greenery of the Parque del Retiro, with its pedestrian paths, fountains and rowing boats to rent on the lake. Wait there for sunset, reading on the grass, then immerse yourself in the city's nightlife, enjoying tapas in typical taverns and dancing the night away in one of the capital's many bars that never sleep.

Don't forget the hidden gems just outside the city, such as Aranjuez, Alcalá de Henares and San Lorenzo del Escorial, or original and picturesque locations such as Chinchón and the Sierra villages.

Book your campsite near Madrid and get to know one of Europe's liveliest capital cities! 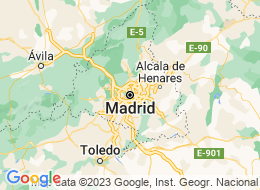 A selection of the best campsites in Madrid