Languedoc-Roussillon is a historical coastal region in southern France, between Provence and the border with Spain. It was merged with Midi-Pyrénées to become the Occitanie region.

You'll find lots of beautiful, interesting towns here, great places to visit year-round: Seaside Montpellier with its medieval centre. Carcassonne, one of the most famous fortified cities in the world. Roman Nîmes, with a perfectly preserved arena. But most people associate Languedoc with summer sun holidays in its bustling seaside resorts, from Sète with its canals, interesting salt marshes and kilometres of wide sandy beaches, all the way along to pretty Collioure at the Spanish border. Beautiful beaches - like Plage de la Grande Conque in Agde and Plage de l'Espiguette in Le Grau-du-Roi - can be found all along the coast.

Languedoc also produces many different types of wines, from sparkling white crémant to full-bodied Pays d’Oc reds and dessert wines. (The ‘Oc’ in Pays d’Oc, in Languedoc and in the new name of Occitanie, comes from the ancient language of this area: occitaine.) As for food, if you like fruits de la mer, you should definitely treat yourself here: local oysters, mussels, squid and anchovies shouldn’t be hard to find.

This region is very well-served by the TGV (fast train) from Paris and even by the Eurostar from London. So, you’ve no reason to delay: book a campsite in Languedoc now! 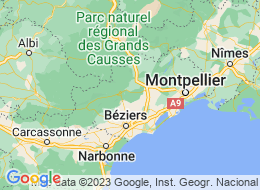 A selection of the best campsites in Languedoc-Roussillon